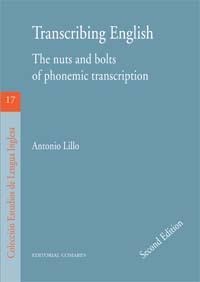 The nuts and bolts of phonemic transcription

Many of you holding this book may not need to be convinced of the importance and
usefulness of phonemic transcription in language learning. If you happen to be among the
happy uninitiated or are just reluctant to deal formally with pronunciation, I would simply say
that transcription is to a language learner what musical notation is to a musician. For all its
limitations, it is the best tool we have to show to the eye what is addressed to the ear alone,
thereby enabling us to separate our perception of sounds from their orthographic
representation. Granted, in the same way that a score tells you nothing about how to play an
instrument, a transcription in itself cannot teach you to articulate a sound or, for that matter,
to acquire new habit patterns for speaking. That is in fact the business of educational
phonetics, not the real purpose of phonemic transcription. What a transcription can do is to
serve as a visual tool to raise awareness of pronunciation, whether it be to improve your own
performance or for teaching purposes.
This book is obviously not intended for beginners, nor, need I say, for those learners
whose sole interest is to make themselves understood in English. The latter need have no
more than the knowledge of phonemic symbols necessary to be able to check the
pronunciation of unfamiliar words in the dictionary. This book has been written primarily for
intermediate and advanced learners of English, for undergraduates intending to pursue a
career in teaching English as a foreign language and for practising teachers of English. It is
hoped, however, that anyone interested in English pronunciation may also find it of value.
While the book is no substitute for a pronunciation course, it provides the minimum
coverage of phonetics and phonology required to understand phonemic transcription. It
supplements an English pronunciation course by dealing with the transcription of high-
frequency words that are somehow troublesome to the foreign student, especially due to the
awkward (though certainly not unsystematic) relationship between sound and spelling. In this
respect, the importance of knowing the spelling patterns for each phoneme cannot be
underestimated, since, for better or worse, the student will always tend to use spelling as a
predictor for pronunciation. For this reason, this book covers the phonemic inventory of
English by focusing not only on the purely phonological and phonetic aspects of each vowel
and consonant, but also on its spelling patterns, including unusual and one-off spellings. The
tests in each section have been designed so as to encourage learners both to reflect on the
transcription of words they already know and to make informed guesses at the pronunciation
of those they do not know.
Given the nature of this book, the choice of a pronunciation model and a transcription
system has been made on the basis of wide acceptance among scholars and teachers
concerned with the teaching of British English. The accent used as a model for transcription
is Received Pronunciation  or Standard Southern British, as some prefer to call it  and the
transcription scheme used is very similar to that employed by J. C. Wells in his Longman
Pronunciation Dictionary (2008; 1st and 2nd edns 1990, 2000) and by Roach, Hartman and
Setter in their three editions of Daniel Joness English Pronouncing Dictionary (2006; 15th
and 16th edns 1997, 2003).
The book consists of four chapters. Chapter 1 introduces some of the main concepts of
phonetics and English phonology, such as the difference between phonetic and phonemic
transcription and the distinction between rhotic and non-rhotic accents. Chapters 2 and 3 deal
with the transcription of vowels and consonants respectively, and both include a number of
practice tests on each category of phonemes (most of them zeroing in on tricky phonemic
IX

contrasts, like /æ, ??, ?/ and /s, z/), on features of connected speech (like elision and
epenthesis) and on the use of the strong and weak forms of structural words. Finally, Chapter
4 concentrates on how to stress words in isolation and in the stream of speech. Besides
providing practice at word and sentence level, this chapter also contains ten passages
designed to develop students skills in transcribing longer stretches of discourse.
The Answer Key at the end of the book provides the correct answers to the questions and
exercises, as well as suggested model transcriptions for the passages in Chapter 4. This is
followed by a brief Reference section listing the sources cited throughout the book and some
suggestions for further reading and reference.