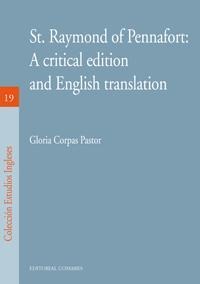 ST. RAYMOND OF PENNAFORT: A CRITICAL EDITION AND ENGLISH TRANSLATION

San Ramón de Penyafort by Fernando Valls Taberner has appeared in many editions and been translated into several different languages. The first Spanish edition 1 dates back to 1936, which is a significant date since it marked the beginning of the Spanish Civil War and, as a result, the actual distribution of the book was delayed by three years. This edition contained a preface by Valls Taberner, eighteen chapters and a bibliography that was divided into a list of general references followed by further reading for each chapter, as well as ten illustrations. In 1953, a second edition was published as the second part of the first volume of a collection of selected works by Fernando Valls Taberner 2, which later appeared in a new fourvolume edition 3. The third edition, which was essentially a reissue of the original 1936 edition, was published in 1979 with the addition of a prologue by Martín de Riquer 4 and a biographical note on Valls Taberner. In 1986, Manuel J. Peláez and José Calvo González published their well-known collection of Valls Taberner?s legal writings alongside his studies in legal science, the history of canon law and political thought 5. This collection reproduced the 1936 edition and included a new section of notes, amendments and additional information (?Notas, enmiendas y adiciones?).