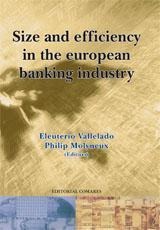 SIZE AND EFFICIENCY IN THE EUROPEAN BANKING INDUSTRY

CHAPTER 1
NEW APPROACHES TO SIZE AND EFFICIENCY IN BANKING;
by Santiago Carbó and Francisco Rodríguez

4.1. INTRODUCTION .
4.2. MAIN FACTORS OF THE EVOLUTION OF THE EFFICIENCY .
4.3. PROGRESS ON THE EFFICIENCY RATIO IN BANKS AND SAVINGS BANKS .
4.4. CONCLUSIONS .

7.1. INTRODUCTION .
7.2. THE CASE: SWEDISH SAVINGS BANKS? PAYMENT AGREEMENTS .
7.3. A THEORETICAL CONTEXT OF INTERCHANGE FEES IN TWO-SIDED NETWORKS .
7.3.1. Benefit and pricing in two-sided networks .
7.3.2. Network profit in a two-sided network .
7.4. A MODEL FOR ANALYSING FIXED COSTS BETWEEN AN INVESTOR BANK AND A USER BANK .
7.5. USING THE MODEL FOR ANALYSING CONSEQUENCES OF FIXED COSTS IN THE RELATION BETWEEN THE LARGE BANK AND THE SMALL BANK .
7.5.1. The large bank?s decisions .
7.5.2. The small bank?s decisions .
7.6. CONCLUSIONS .
REFERENCES .