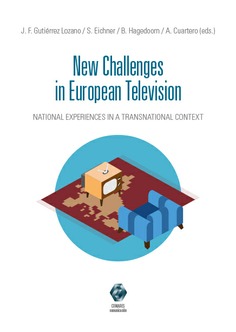 National experiencies in a transnational context

What are the new challenges for production, distribution and reception of European Television from a transnational perspective? What national experiences in a transnational context does contemporary European television fiction offer its international audiences? And what is and should be the social responsibility of television through fiction or other contents? This book aims to examine some of these current transformations, challenges and risks that impact the future of European television and of TV series production, its creative processes, its genres and representations, its distribution, and its reception across Europe. Sixteen scholars from eleven Uni-versities of nine different countries discuss three main topics: the transnationalisation of television, its representation and narration, and its production practices and audience engagement production, mainly of contemporary European television series. Within these topical frames, five European television markets enter the limelight: Turkey, Spain, Portugal, Denmark and Germany. Within the dynamics of an increasingly global and transnatio-nal entangled market, these national case studies of European television fiction are interlinked by their perspec-tive of considering European television as an agent of cultural cooperation and understanding. Our aim is not to provide an exhaustive perspective in all European nations, but rather, to discuss exemplary contemporary tendencies and developments. We thereby operate within logics of centre and periphery in more than just one sense: in terms of geography, power, size, or cultural impact. The collection of cases and perspectives open up broader discussions of television and streaming markets, engage in questions of national, regional, or local identities, and question production culture and mobility and migration processes within Europe and their impact on television consumption. In sum, the set of all these works offers a catalogue of relevant examples of how television in Europe faces the changes of its own concept as a transformed but still vibrant global medium.