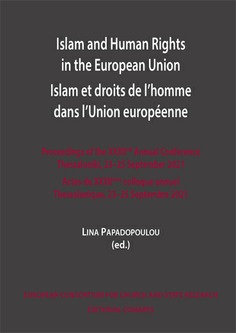 ISLAM AND HUMAN RIGHTS IN THE EUROPEAN UNION

This topical edited volume contains the national reports of the EU Member States and the Union itself on Islam and Human Rights, written by Members or collaborators of the 'European Consortium for Church and State Research', as well as papers presented in the latter's Annual Meeting, which took place in Thessaloniki, in September 2021. The reports raise questions regarding the social framework and the institutional recognition of the Muslim communities by the state, the application of Sharia (both as state law and / or private international law) and its relationship to fundamental rights and human dignity, and the discrimination of Muslims and by Muslims. Moreover, the reports focus on the exercise of religious freedom by Muslim and the challenges posed by Islam in the traditional understanding and application of democracy and rights in Europe.