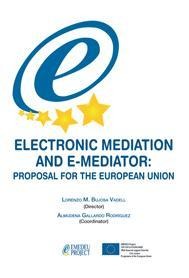 Proposal for the European Union

The central idea behind the EMEDEU project is the development of a pre-legislative proposal for the promotion of effective electronic mediation in cross-border civil and commercial matters at European level, laying down the groundwork for the future application of the European rules about ODR. This project also has a second objective: the design of the European Code of Conduct for electronic mediators.

Accordingly, the EMEDEU project aimed to make available a legal framework suited for an effective cross-border electronic mediation in civil and commercial matters with maximum procedural guarantees and uniformity throughout the territory of the European Union. It was therefore essential to incorporate the views of litigants and lawyers about the possibility of creating a wide out-of-court electronic mediation procedure.

In addition, the EMEDEU project examines the consequences that ODR techniques would have on mediators, which it is referred as E-mediator or mediator 2.0. We have researched about their legal statute: rights, responsibilities, skills, qualities, training, etc. Our proposal develops a proposal of European Code of Conduct for electronic mediators, which could serve as a reference for governments and their national administrations of justice, as well as mediators themselves.

The interest of the EMEDEU project is to justify the progression of mediation and its consolidation as one of the most important out-of-court dispute resolution systems at European level, requiring the dissemination and transmission of the results of our study to the society, and informing the legal community about the needs of adapting to these new procedures which are complement and increment access to justice for many types of disputes. In addition we have identified best practices and developed minimum rules for the promotion of e-mediation procedures that incorporate ICT tools, making pre-legislative recommendations for the EU while taking into consideration the existing European legislation about ODR and in full association with the aims of the EU Framework Programme for Research and Innovation Horizon 2020.
This book provides the design of a specific European Code of Conduct for electronic mediators (E-mediator), which establishes the rules and performance requirements of electronic mediators and mediation institutions in cross-border cases, as well as their skills, rights, obligations and responsibilities.

The EMEDEU project examine an evolving number of number of public documentsin the form of scientific publications and public national reports containing the results of research carried out by the consortium members during this project.

This book integrates first level scientific experts from Universities of different EU Member States (namely: Spain, Portugal, UK, France and Italy) that came from countries with different legal systems as well as different levels of development of mediation for private disputes.The comparative perspective of this study seeks to bring together the different sensitivities of the various legal traditions of the European Union and provide a comprehensive picture of the current developments in mediation. In doing so, it makes specific proposals to adapt the mediator features to the new and diverse circumstances of electronic mediation.

PART I
ONLINE MEDIATION IN CROSS-BORDER CIVIL AND COMMERCIAL
MATTERS IN THE EUROPEAN UNION. GENERALS ASPECTS
OF THE LEGAL FRAMEWORK AT INTERNATIONAL LEVEL:
PROPOSALS AND RECOMMENDATIONS

MEMBERS OF THE EMEDEU PROJECT

Proposal for the Regulation of an Online Dispute Resolution Platform within the Scope of the European Union .
FEDERICO BUENO DE MATA. Spain

Online Mediation in Cross-Border Civil and Commercial Matters in the UK: A Proposal for a European Legal Framework .
PABLO CORTÉS. UK

Mediation: Control of the Guarantees in the Process .
M.ª INMACULADA SÁNCHEZ BARRIOS. Spain

Recommendations for the Improvement of Personal Elements in the Process of Electronic Mediation in Cross-Border Civil and Commercial Matters in the EU .
ROMINA CANESSA. Italy

Proposal for a Regulation Online Mediation in Cross-border Civil and Commercial Matters in the European Union: Procedural Aspects, Recognition and Enforcement of the Agreement .
MARCO CARVALHO GONÇALVES. Portugal

The Confidentiality Intrinsic to Mediation and the Demand for Data Protection .
LORENZO COTINO HUESO. Spain

Report on the Feasibility of an Electronic Mediation Platform for the European Union .
OSCAR DANIEL FRANCO CONFORTI. Spain

What is the Next Step for Policy Makers to Facilitating the Development of Online Mediation? .
VINCENT TILMAN. Belgium

MEMBERS OF THE EMEDEU PROJECT

The Electronic Mediator in the UK .
PABLO CORTÉS. UK

The Legal Statute of the Electronic Mediator in Italian Law and Proposal for EU Law .
ANDREA GIUSSANI. Italy

Social and Structural Aspects in the Training of Mediators .
RODRIGO RIVERA MORALES. Spain/Venezuela